In 2015, Father Patrick Kirsch, our founding pastor, was returning to fulltime ministry from his sabbatical. At his meeting with Bishop Gerald Barnes, Father Pat shared with Bishop his desire to become pastor of a new parish community to be formed in the City of Eastvale. Bishop accepted his request with great joy and enthusiasm. Bishop Barnes named us Blessed Oscar Romero, the first parish in the world from its inception to be named after this amazing man. For the past 3 years, Father Kirsch, staff, and parishioners have diligently been working to form our parish  community. In cooperation and guidance of the Office of Construction and Real Estate for the Diocese of San Bernardino, a master plan was created for our parish site along with renderings for our future church building. After meeting with the Diocesan Financial Review Committee in February 2018, our        parish master plan was submitted to Bishop Barnes for final approval. In May 2018, Father Kirsch received approval to move forward with building our parish church first and to begin an official capital campaign. On October 14, 2018, our parish patron Blessed Oscar Romero was canonized.  Bishop Barnes presided over a Mass to celebrate renaming of our parish to Saint Oscar Romero Catholic Church on November 25, 2018.

In the past three years, we have witnessed abundant blessings with great growth in our community. With a handful attending our weekend Masses at the beginning to now having close to 1,500 parishioners for our weekend participation.  We continue to be blessed to have the ability to rent the  Multipurpose room at Dr. Augustine Ramirez Intermediate School, but we know this is temporary.  Each of us longs for our own home to celebrate the Holy Eucharist. We also desire adequate and sufficient space to provide meeting rooms for the numerous parish ministries that have formed. Our challenge ahead  of us is to raise enough funds to build the structures we need to provide for our parish needs. 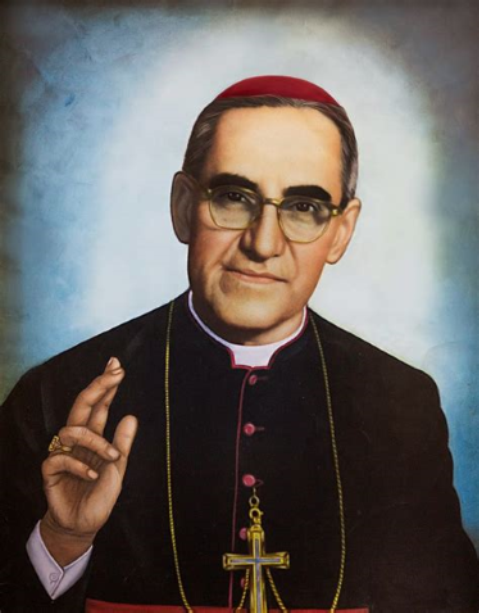 Voice for the Poor

SAINT OSCAR ROMERO served as Archbishop of the Archdiocese of San   Salvador, El Salvador, from 1977 until he was martyred for his faith in 1980. During that time, political violence, disappearances and human rights violations were widespread. Many priests and nuns spoke out on   behalf of the victims, and many were murdered because of this. Saint Oscar Romero´s friend and fellow priest, Father Rutilio Grande, was killed in 1977 just as Saint Oscar Romero began serving as archbishop. After Father Grande´s murder, Saint Oscar Romero spoke out even more strongly on  behalf of the suffering and marginalized.

Saint Oscar Romero heard the stories of the poor, and his voice against the violence grew louder and louder.  People in villages across the nation tuned in to Saint Oscar Romero’s radio homilies, finding strength and comfort in his words. Each week he would denounce the violence and urge people to live out Christ’s Gospel message of peace and love. He used his position of prominence to become what many called the voice of the voiceless.